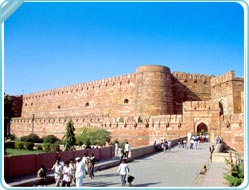 The southern gateway or the Amar Singh Gate was originally known as 'Akbar Darwaza' and was reserved for Mughal emperor Akbar and his personal entourage. Shah Jehan renamed it after the brave Rao Amar Singh of Jodhpur. According to the interesting anecdote, Amar Singh slew Salabat Khan, the chief treasurer of Shah Jehan in front of the emperor. Then he leapt with his horse over the high walls of the fort. The horse died with the fatal jump and Amar Singh was arrested and put to death. However, his courage won the admiration of the emperor and the gate was renamed as Amar Singh Gate in his honor. A red sandstone statue of his horse was erected at the very spot where he died.

The gate shares architectural traits with the Delhi Gate such as having a drawbridge over the moat, dangerous diversions at the entrance and a high ramp paved with bricks. There are two octagonal towers on its either side. The most imposing structure here is the Naubat Khana surrounded by pillared pavilions. The bastions are not very impressive and it not as profusely decorated as some of the other structures in the fort. Yet, the oblong and arched panels in the lower portions are adorned with multi-colored glazed tiles, mainly in yellow, green, blue and white colors. Panels on the upper portion are plain. Bastions are crowned by piered chhatri with a domed cupola and an inverted lotus. The traces suggest that these cupolas were also covered with glazed tiles once.