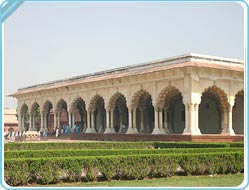 A result of earliest manifestation of Shah Jehan's love for marble, Diwan-I-Am or Hall of Public Audience was the place where the emperor addressed the general public as well as the nobility. Constructed between 1631-40, it is situated close to Machchhi Bhawan. The huge assembly hall measuring 201' by 67' has flat roof and two arched red sandstone gateways to the north and south. The façade has an arcade with nine bold arches and the hall is divided into three aisles. Though the building was constructed in red sandstone, yet it had been plastered with white shell plaster to resemble the white marble. The raised rectangular chamber from where the emperor addressed the people was ostentatiously ornamented.

Made in marble, this 'jharokha' with a three-arched opening and inlaid with precious stones, was known as the 'Takht-i-Murassa' (the Throne Room). This chamber was connected to the royal apartments and the royal ladies could watch the ceremonials of the Diwan-i-Am through the marble windows with perforated screens on the right and left of the enperor's chamber, while not being seen by those in the hall. The marble dias below this chamber was known as 'Baithak'. It used to serve as the seat for Wazir, who presented petitions to the emperor. It is said that the hall used to have silver balustrades for the nobility, where they could stand according to their ranks and the outlines of the columns and the spandrels were done in gold.