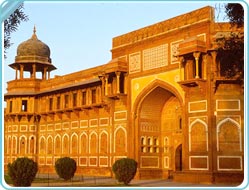 Ever since Babur defeated and killed Ibrahin Lodi at Panipat in 1526, Agra played an important center of Mughal Empire. Akbar chose this city on the bank of River Yamuna as his capital and proceeded to build a strong citadel for the purpose. It is said that he destroyed the damaged old fort of Agra for the purpose and raised this grand group of monuments instead in red sandstone. Started in 1565, it took eight years and thirty-five lakh rupees to complete its construction and is second only to Taj in Agra. Qasim Khan Mir Barr-u-Bahr supervised the construction of this building.

One of the large fortified residences built at various strategic points of Mughal Empire; it had over five hundred buildings, as mentioned by Abul Fazal in his chronicles. Most of the buildings added later use marble as the chief construction material. At the time of Akbar, River Yamuna touched the fort and thus, a number of ghats were built here. Some of these ghats were meant to load and unload goods transported through river and other covered passages were for use by the harem inmates only.