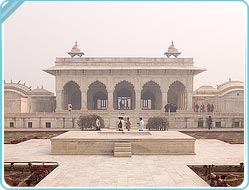 Built by Shah Jehan between 1631-40, 'Khas Mahal' or 'Aramgah-i-Muqaddar' has river on the one side and Anguri Bagh on the other. Built for the two favorite daughters of Shah Jehan, Jahanara and Roshanara, it has a beautiful tank in front with fountains, white marble pavilions and open courts. The central hall or baradari and the adjoining colonnade or portico is almost of same size. The arched recesses of the main hall lead to the side rooms. The richly ornamented ceilings of the palace are flat and the complex has stylishly carved and molded brackets. The niches in the walls are believed to have contained portraits of Mughal emperors while the iron rings in the roof of the central hall were meant for the chandeliers.

It is believed that Jahanara lived in the northern one of the two almost identical pavilions separated from the central hall by a high marble wall. These red sand stone pavilions have been plastered with white shell plaster and have skilful gold work in its mural paintings. The interiors are profusely ornamented in floral and geometrical patterns from the dados to the ceiling. Gold and blue, the royal colors, have been abundantly used here and still their traces are visible on the walls.