Planning India Tour ? Click Here
Lucknow Guide
This is a short write up on the tomb of Mariam-Zamani at Agra, India.
Travel to Agra: Mariam-Zamani Tomb 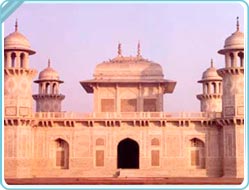 The daughter of Raja Bharmal Kachhwaha of Ambar or Amer, the wife of great Mughal Emperor Akbar and the mother of his much-awaited heir Salim, this Rajpur queen was known in Mughal History as 'Mariam Zamani' meaning 'Compassionate to the World'. She was so named by Akbar on the eve of the birth of his son and heir Salim (later known as Jehangir) in 1569 at Fatehpur Sikri. When she died in 1623 at Agra, Jehangir built a stylish tomb for his mother close to the tomb of Akbar within the compound of Christian Missionary Society. These tombs are situated in Sikandra region, which was so named because Sikander Lodi was its founder.

Originally, this structure was a barahdari, stylized into the tomb by Mughals by reconstructing the four facades of buildings in the Mughal architectural style of that time and making little alterations such as adding a crypt below the central compartment meant to be used as the mortuary chamber for the queen. One could visit the crypt using the red stone stairs built for the purpose. In the central chamber, a cenotaph was placed in just above the real tomb that was protected by red stone 'jalied' balustrade on all sides.