Planning India Tour ? Click Here
Lucknow Guide
Often regarded as a draft of the Taj Mahal, Tomb of I'timad-ud-Daulah was commissioned by Nūr Jahan, the wife of Jahangir, for her father Mirza Ghiyas Beg.
Travel to Agra: Tomb of Itmad-ud-Daulah 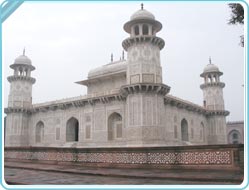 Nūr Jahan, the wife of Mughal emperor Jahangir, had commissioned the mausoleum for her father Mirza Ghiyas Beg, who had been given the title of I'timad-ud-Daulah (pillar of the state). He was also the grandfather of Mumtaz Mahal, the wife of Shah Jahan, who built the Taj Mahal.

Along with the main building, the Tomb of I'timad-ud-Daulah consists of numerous other buildings and gardens. The tomb represents a transition between the first phase of the Mughal architecture to its second phase.

One can enter the tomb of Itmad-ud-Daulah from the east, which is the only functional gateway of the tomb. The other three gateways built in other directions were constructed only to maintain the symmetry, following the rules of the Char Bagh pattern. Thus, they can also be 'garden pavilions'. These red sandstone gateways have inlaid marble designs and are double storeyed. Marble inlay work can be seen on the dados of the main iwan and spandrels of arches too. The northern and southern pavilions are almost identical. They have a single storeyed iwan in the middle and double storeyed wings on their sides. There are rooms and halls on the first floor of these pavilions. There are stairways on the sides of the façade. There are chhatris crowning these pavilions. The largest and most elaborately decorated pavilion is the western one, which is situated on the riverbank and is believed to be used by Itmad-ud-Daulah as the pleasure pavilion during his lifetime. Situated centrally in the Char Bagh, the tomb is surrounded on all sides by tanks and water channels.

Mosaic and Inlay work has been widely used in the tomb of Itimad-ud-Daulah. The white marble interiors are adorned with prolific, graceful and convoluted stylized inlay and stucco designs. The main gateway showcases white marble inlay work on red sandstone. Geometrical designs and wine vases are depicted frequently. The red sandstone platform has bands of highly stylized floral patterns and creepers. The tomb marks the use of dados in their fully developed forms as a distinct feature of architectural embellishment. The sides of entrance arches above the dados have superb inlaid work too with the designs characteristic of the times of Jehangir such as vases with serpentine handles and cypress motifs.

The extensive use of rare and semi precious stones of all hues and shades are used for this inlay mosaic work such as agate, carnelian, garnet, jade, jasper, lapis lazuli, opal, onyx and turquoise used in combination with black, white and yellow marble. The central hall, the corner chambers and side halls boast of exceptional wall and stucco paintings depicting guldastas, wine vases, cypress and other Persian motifs. Embroidery designs are often used as the incised stucco on the ceilings and animal motifs can be seen frequently. The designs in the central chamber seem to be moving and human figures are unexpectedly depicted in a scheme of painted panels. Inscriptions on white marble panels can be seen on the frieze, above the arches and the octagonal towers.