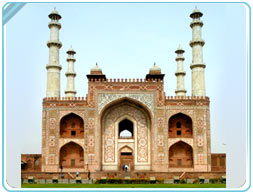 Akbar started building his own mausoleum, near Agra, that was to be a perfect blend of Hindu, Christian, Islamic, Buddhist and Jain designs and motifs, bespeaking of his religious tolerance and secular views. However, he could not complete it and died. Thus, his son Jehangir completed his tomb, popularly known as Sikandra after Sikandra Lodi, who established the community where Akbar's Tomb is located. However, Jehangir made quite a number of alterations in the original plan, in keeping with the development of Mughal art and architecture. The tomb has three-storeyed red sandstone minarets displaying wondrous inlay work of marble on the four corners of the building. 'Langurs', black-faced monkeys have found a safe haven in the beautiful gardens surrounding the mausoleum and often stray to the walkways too.

One can see the Baradi palace in the gardens built by Sikander Lodhi. The tomb building is shaped like a truncated pyramid and has five storeys while the main tomb has a distinct square design. There are spacious cloisters on the ground floor. An elaborately decorated vestibule occupies the centre of the southern side, highlighted by exquisite carvings, artistic paintings and inlay work in geometric and floral designs enshrining the tombstone of Akbar. Other tombs on this floor belong to Shakrul Nisha Begum and Aram Bano, the daughters of Akbar. The ornamental arch and square pillar on the second storey looks unique. The third and fourth storeys also have identical arrangement of arches supported on pillars and chhatris adorning the façades. All the storeys are built in red stone except the fifth one, which is entirely in white marble.