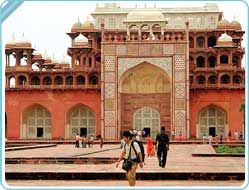 Located centrally in the square plan, at the junction of four causeways dividing the garden into four quarters, the main tomb building has five storeys built in the shape of a truncated pyramid. It stands on a high stone platform. There are massive iwans in the centre of all sides that are as high as the tomb and have beautiful panels adorned with inlaid mosaic work. Inlaid arabesque work graces its spandrels, semi-soffits boast of paintings and turrets have chevron designs. They are crowned by white marble chhaparkhat with eight pillars. The mortuary chambers are on the ground floor. The vestibule leading to the Akbar's tomb is decorated with floresque, arabesque and calligraphic designs. The chamber itself is simple and paved with stone.

The other chambers entomb graves of Aram Banu and Shukru-n-nisa (daughters of Akbar), Zebu-n-nisa (daughter of Aurangzeb) and Sulaiman Shikoh (son of Shah Alam). The first storey houses a large platform and corridors roofed by stone arches in each façade. The second storey is built of red sandstone and has arched verandah with twenty-three bays. These bays are crowned by cupolas and white marble pyramidal roofs decorated with glazed tiles arranged in geometrical designs. The third and fourth storeys follow similar plans, though they reduce in size with the ascending storeys. The fifth and the top most storey is entirely in white marble and has no roof. It has delicate marble screens as its walls.