Planning India Tour ? Click Here
Lucknow Guide
Taj Mahal in India is one of the wonders. Read more about the Taj Mahal at Agra in India.
Travel to Agra: Taj Mahal India 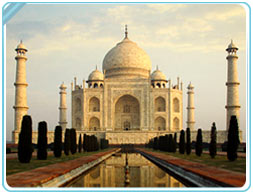 The epitome of love, the elegy in marble, Taj Mahal is one of the most graceful and extravagant monuments in India. The seventh wonder of the world, it attracts thousands of tourists every year. A symbol of endless love and devotion of Emperor Shah Jehan to his beloved queen Mumtaz Mahal, the Taj is a befitting tribute to so romantic-a-love story and so divine an emotion that binds two souls forever. A visit to Taj Mahal, the mausoleum of Mumtaz, is a rare experience. It has become a signature monument of Indian architecture and someone has rightly said that Taj jas been designed like a palace and finished like a jewel.

The pure white marble structure, Taj acquires different shades at different times of the day and with changing seasons. The soft pink color of the dawn and fiery shade that it acquires at dusk are all bewitching. Though, the light that presents it in the best possible manner is perhaps that of full moon, when it shines with pristine white and silver glory. Taj seems to be as fanciful as the love story it represents of an all-mighty prince and a simple girl hawking silk and glass beads in the market and their marriage that seems so much like a fairy tale. The faithful wife marched with the prince, who was later crowned the emperor, on his every expedition and bore him fourteen children. On her deathbed, she made the emperor to promise to make a lovely monument unlike any other in the world as the tribute to their loving moments that were a treasure for her. The emperor kept the promise faithfully and thus, Taj was conceived.