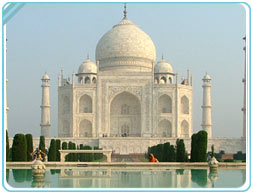 On the bank of River Yamsua, the third Mughal Emperor Shah Jahan immortalized his love for his beloved queen Mumtaj Mahal by constructing this marble wonder as a tribute to her, when she died during the birth of their fourteenth child. There is a controversy on the name of the chief architect of Taj but there are many sources, which propose the name of the Indian architect of Persian origin known as Ustad Ahmad Lahori for the credit. Its construction began in 1630 and master builders, architects, skilled masons and sculptors were imported from all over the world including Persia and Europe to contribute to the beauty of Taj. Twelve years of hard labor of about 20,000 laborers and millions of rupees went into its making.

There are five main elements of the Taj complex - the main gateway or 'Darwazah', the garden with its ingenious waterways or 'Bageecha', the mosque or 'Maszid', the rest house or 'Naqqar Khana' and the main tomb building or 'Rauza'. The actual graves are kept inside while the cenotaphs are placed just above them to be viewed by the general public. The beautiful marble inlay work known as 'Pietra Dura' and the well-planned gardens of Taj with their water channels and lotus pools are some of the most impressive things to see here.