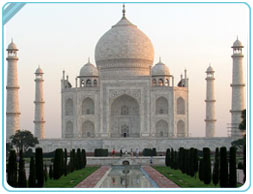 Taj Mahal was constructed between 1631 A.D and 1654 A.D. The construction is said to have been done by a workforce of 22,000 that contained among others laborers, Naqqashi laborers, painters, stonecutters, garden-layers, gardeners, embroidery artists and masons. The Mughal Emperor Shah Jahan commissioned its construction. It was constructed as a mausoleum for Arjumand Begum, who was re-christened Mumtaz after her marriage to Shah Jahan. It is said that Shah Jahan was very much pained by the death of his favorite wife. He constructed this mausoleum so that its pleasant site would give him solace.

The Taj Maha is the finest example of Mughal architecture, a style that is a subtle blend of elements from Persian, Indian and Turkish architecture. The Taj Mahal has achieved special note because of the romance of its inspiration. It is wrongly perceived that only the white domed marble mausoleum is Taj. The Taj Mahal is actually an integrated complex of structures that contains gardens, gateways, inns and a mosque.