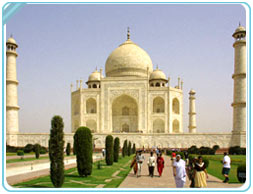 The Taj Mahal is the most brilliant and the most triumphant achievement among the funeral monuments all around the world. It marks the culmination in the evolution of the tomb. The Indian builders achieved the most beautiful expression through this creation under the Mughals. The Taj Mahal in its entirety is the result of the grand total of all the efforts put meticulously by the expert artists of the age. They harmonized all the fine features in their minutest details and brilliantly put together to produce the most pleasant impression. The minarets and the grand elevation play an important part in the aesthetics of the Taj Mahal. The beautifully laid garden presents the white marble structure more imposingly.

The main idea behind laying the garden was to give the monument a more beautiful setting. The sky provides a wonderful backdrop to the Taj. The Taj overhangs the river grandly and is always seen in harmony with a blue sky in the background. The Taj Mahal is always seen as ever-changing and against an ever new backdrop because of the background changing its color every now and then. Besides the above mentioned ones there are other substantial factors which add to the looks and beauty of the Taj.

Various parts combine together in symmetry and pleasing proportion to make the monument look more astonishing. And all these structural masses have been beautifully harmonized. The overall unity which has thus been obtained is simply elegant. If we intend to appreciate a work of art our approach should be synthetic; we can't appreciate it in parts, we can do so only as a whole. The parts therefore should be so assimilated together that each looses its identity in the total unity. The lover of architecture must be aware of the synthetic nature of art as any work of art can not be appreciated in isolation of its parts. It is the unity of different parts which make the work look great.

A wonderful artistic and visual effect of the Taj is obtained by its elevation, superstructure, balanced and symmetrical combination of its parts. Different structural masses have been balanced most harmoniously. The monument reflects beautiful admixture of lines, horizontal with vertical on the one hand and straight with curved on the other. A combination of solids and voids imparts a three dimensional effect and allows a beautiful play of light and gives a color independence to the monument. Not only white marble was selected by the architects for exterior decoration but they also manipulated the material to produce the best possible effects of light. This is best reflected in the colored inlay of the portal-dados, the spandrels of the arches and the pilasters. The receding plinths, give the Taj a towering effect and it appears as if it is about to rise high into the sky. The Taj marks the ultimate moment in the development of Mughal architecture. It formed the stage of the art from where it could only decline. The Taj is the perfect expression of beauty and the illusionary effect of the monument adds to its aesthetics. This illusion was created by the architect with the help of such gross materials as lime, brick and white marble. The architect of the Taj was a great master of aesthetics and he successfully incorporated it in his masterpiece. All this go together to prove the fact that the Taj is more a work of art than of architecture. It is more a work of beauty than a mere Mughal mausoleum.