Planning India Tour ? Click Here
Lucknow Guide
It is a short write up on the layout, plan and design of the Taj Mahal, India.
Travel to Agra: Taj Mahal: Architecture: Layout of Taj Mahal 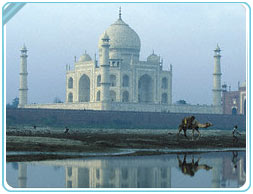 The design of the Taj Mahal presents the culmination of a process which started much before its inception. The uniqueness and design of the Taj Mahal is not the result of a single brain, instead various superb features of its construction can be traced back systematically to the earlier examples during the whole evolutionary process. The river bank, at a respectable distance from the hullabaloo of the capital was chosen to give it a beautiful, natural and romantic setting.

The bank of river Yamuna was chosen so that the colossal structure could tower magnificently and imposingly over its surroundings. The river takes a sharp turn at this place, almost at right angle so that a water-shed is made where the thrust of the water is minimum. It was the safest point on the river bank. The square garden has been divided into four large quarters, separated by broad water channels with fountains and double causeways on either side. This garden setting provides an important aesthetics to the Taj. The main gate of the Taj Mahal is on the south side. It was designed to play the part of a monumental entrance to the grand structure. White marble has been used on this gateway to give emphasis and also to diminish the too sober and too classical an appearance of red sandstone. Chhatris with marble cupolas flanked by pinnacles is perhaps the most important feature of the gateway.

The genius of the builder and his innovations are also reflected in yet another feature of its planning. In the Taj Mahal the builder has substituted the false gateways with beautiful water-pavilions on the east and the west sides, each rising at the end of the broad water canal. Though each is an independent structure, it forms an indivisible part of the whole charbagh plan. It appears as if the water channel was chiefly planned to give a suitable background for the water pavilion.