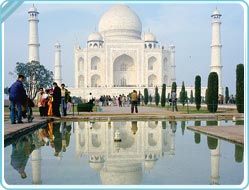 As for main supply of water, it was obtained through earthenware pipes. One such main line of supply was discovered under the bed of the western canal. The original intent of the builders of the Taj was probably to present a synthetic composition. The irrigation work at the garden is a great example of this. The garden is irrigated by the overflowing of canals; exception being the outlets at the two extreme ends. The fountains provide inlets to the north-south canal. The west-east canal received its water through an interconnection with the north-south canal. The quarters near the canals received an adequate supply of water while the distant quarters got a smaller supply as the quarters near the canals could be used for growing flower and other plants which would not obstruct the general view. The distant quarters on the other hand ware suitable only for tall trees. The Taj Mahal is perhaps the only monument of the world with such great aesthetic considerations so detailed and yet so influential.