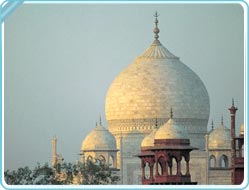 A bulging white double - dome with a broad padma-kosa (lotus - petals) and beautiful Kalasa-finial is mounted on the tomb. The bulbous dome of the Taj Mahal rests on an amazingly high drum and has a total height of 145' 8" from the base of the drum to the summit of the finial. Chhatris flank the dome on all the four angles which appear to be attached to the dome when viewed from all sides. This feature became possible apparently after the experience gained by the builders in mishandling Humayun's tomb, where the kiosks seem to be excessively detached from the dome. At the Taj the builder calculated the distance between the two features for the precise relationship they were intended to present together. The dome doesn't give an impression of isolation but is seen always in terms of the Chhatris amid a group of pinnacles on all sides. This plan, which is also known as panch-ratna gives the Taj Mahal such a remarkable, impressive and unparalleled grace.