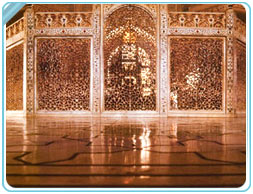 The architect of the Taj put a great deal of thought into the decorative methods of e.g. Carving or color like glazed-tiling, stucco and painting, mosaic and inlay work. The Mughals were known for their love of colors and they made use of almost all decorative schemes and patterns which had been introduced into India following its conquest by the Muslims. They used glazed and enamel tiling, mosaic etc. for decorating their buildings. Glazed tiles were used mainly for exterior decoration whereas glass mosaic and paintings embellished the interiors. Stucco art was used in decorating mainly the interiors but exterior surfaces have also been ornamented with success.

Dado-panels of white marbles were used for the first time in the second storey hall of the main gate, eastern and western false gateways at the tomb of Akbar at Sikandara. Each white marble dado is outlined with black marble lining to improve its artistic effect. Black marble and abri stones of a chocolate-grey-yellowish colour have been used for inlay work. The inlaid borders at the Taj mark the ideal stage of its development. The inlaid borders on the dados in the interior hall have been thoughtfully distributed.

Epigraphic elements of Koranic suras form an important element of exterior decoration. Racemes, bouquets of flowers, zigzag motifs and series of small arches are some of the most commonly used decorative elements. Slender twigs, twisting leaves and bold flowers combine to give the Dado a beautiful look. The engraved patterns combine regally with the inlaid border composed of a highly stylized pattern of set curves and twists. Suitable stones have been used to give different tints to the pattern. A delicate framing is given to the Kalasa-plant by the border. The most pleasing part is the co-relation between the art of chiseling and inlaying. Jali around the cenotaph Inlay has also been used profusely on the marble curtain around the cenotaphs. These are extremely stylized floral designs.

Here, the inlay has been very well combined with the jali-work. The inlay work on the spandrels of the arches in the interior and exterior adds magnificence to the overall aesthetic effect. Contemporary texts specify the stones used in decoration and inlay work they are- Lapis lazuli, various types of jasper, agate, carnelian, jade, amethyst, turquoise, onyx, coral etc. The Makrana marble with its pearly clarity has contributed most to the beauty of the Taj Mahal. It acquires never-ending shades of colour and soft, unearthly shadows.

It appears masked at down, dazzles at midday, rosy at sunset and wonderfully cold in moonlight when the dome, hangs poised among the stars like a great gem. Another interesting facet of the decoration of the Taj is the incised painting of the mosque and Mehmankhana. The contemporary folk art developed on extremely simple lines and did not have the splendor of the court art with so many stones and colors playing an important part. It was mostly incised and made use of two simple colors-white and red. The most developed stage of this technique is found at the Taj Mahal, in the Mosque and the Mehmankhana, Here again only two colors have been used, a hirmichi red on a white backdrop which is allowed to show superbly through the scrapped off leaves, flowers and the outlines. The small curves of white thus bloom energetically on a red ground-portions of the background and have thus artistically been brought to the forefront. It is highly unconceivable that such a great aesthetic effect could be obtained on such a large scale, by the use of these two simple colors. This harmony was made possible by the skilful artists and their techniques.