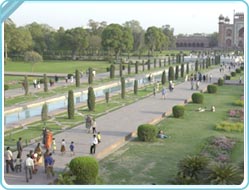 It is beyond doubt that the garden and the water devices have been manipulated most successfully to create the best and the most wonderful architectural effect at the Taj. The artists at the here attempted to give a heavenly look to the monument by the way of gardens and water devices. Most arrangements of the Taj are based on number four or its multiples as this number is considered holiest in Islam. The layout of the gardens also followed the same formula. Two marble canals with fountains cross in the centre of the garden dividing it into four equal squares.

The charbagh plan, as it is called, has been beautifully adopted at the Taj. In fact, here it has been put to a better use than in any earlier examples. The mausoleum stands on the north side of this garden. There is another subdivision of each of its four quarters into 16 smaller quarters. There is an elevated marble lotus pond with a cusped and trefoil border in the centre of the garden. The water of this pond gives the perfect reflection of the great monument. The mausoleum can be viewed clearly from any location.

Another genius of the architect is reflected in the lay out of the fountains and somber rows of cypress trees, which are present only on the north-south water canal, lest the attention of the onlooker would be diverted to the sides!! The mastery of the architect is also visible in the management of the water system. A series of purs (manual system of drawing water from a water body using a rope and bucket pulled by bullocks) were used in drawing water from the river. It was again raised by a series of thirteen purs which were worked by bullocks.

Most of the features of the water-system have survived. The only exception being the ramp. An overhead water channel carried water into another storage tank of still greater magnitude. Water was thus, finally raised to this stage with fourteen purs and passed into a channel which filled three supply tanks. The last tank had pipe mouths in its eastern side. The pipes descended below and after traveling underground through the intervening passage crossed into Taj enclosure near the western water pavilion. Underground pipes fed the fountains. There is one pipe line which runs directly towards the mosque to supply the fountains in the tanks on the red sandstone plinth below the marble structure. Pipes of copper were used for separate series of fountains.

The whole ethereal effect at the Taj has been obtained by fountains which have been laid methodically in the main south-north canal. Five more marble fountains have been placed superbly in the raised central lotus pond. Twenty four more fountains adorn this pond on all the four sides. The planner of the Taj preferred to add to the gorgeous view of the monument from the front by providing these splendid bud-shaped fountains in the centre. The water channels at the Taj are broad glossy sheets of crystal clear water showcasing the taj and allowing the reflection of the white tomb to dance in its soft ripples that the air now and then weaves.