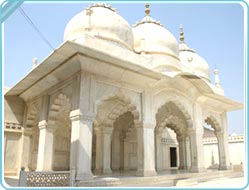 Nagina Masjid or the Gem Mosque is made up of pure white marble and was meant for the personal use of the emperor. Built between 1631-40 in the northwestern corner of the Machchhi Bhawan, it has a marble paved court enclosed by walls to the north, south and east and the prayer chamber on the west. The prayer chamber is also made up of marble and has three domes on its top. The mosque has a three-arched façade with the cusps and supported on slender piers as its entrance. The arch in the middle is larger and has nine cusps and ones on the either sides have seven cusps only.

The mihrab pointing the direction of Holy Kabah is situated on the western wall of the prayer chamber. The arches have a broad projecting chhajja on three sides. The distinctive feature of the mosque that makes it stand apart from other buildings of the fort is above the arches. A curve can also be seen in the middle of the façade i.e. in the chhajja as well as in the parapet, which gives extra importance to the central part in the façade. This feature known as bangladar is a distinctive characteristic of this mosque. The three bulbous domes are crowned by inverted lotus and finials and the central one is larger than the other two.