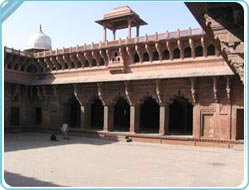 Machchi Bhawan or the Fish Chamber is so called for its believed that it was used to rear gold fishes for the emperor. Situated in front of the Diwan-i-Khas, it is believed to have marble fountains and tanks once, for the purpose. However, Badshahnama terms this building as the treasury for imperial ornaments and jewels. The quadrangle has a spacious courtyard with entrance to its north and double-storeyed arched galleries on the other three sides. On the upper storey of the southern side, a small marble pavilion with a sun medallion on its ceiling projects outward. It is believed to be the place where the Golden Throne of the emperor was placed to allow him to have the entire view of the court below. The rooms of the lower floor served as the treasury.

There was a raised white marble platform on the eastern side and a luxurious, multi-chambered royal bath in the north. The southern pavilion served as a small reception room known as Diwan-i-Khas and has an open terrace with a white and a black marble throne. The black throne has a skillfully carved inscription dating back to 1602, in the reign of Salim. The stucco relief work is one of the masterpieces and the intermediary space between the stone brackets of the upper storey chajja is adorned with fine white lime into delightfully molded designs. Stuccowork in fine white plaster adorns the bay attached to the throne pavilion and adorning the vaults and ceilings is done so marvelously that they seem to be made of chiseled marble.