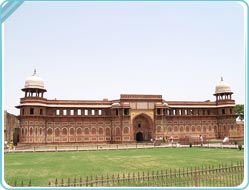 Jehangiri Mahal is a stunning example of Mughal architecture at its best. Built between 1565-69, it has an impressive façade facing an open court to the west. It has an arched portal with two beautiful jharokhas, a series of ornamental arches and an octagonal tower on its either side. There is a complex arrangement of rooms, halls, corridors, galleries and verandahs in the palace, around a quare central courtyard. The main portal leads to a square entrance hall with ribs-and-panels vaulted ceiling that takes one to identical annexes built on the northern and southern side of the palace and have beautiful Tibara dalans and side rooms. Built in red sandstone, the court showcases skillfully carved brackets supporting chhajja, a whispering gallery in the second storey and the jalied balustrade crowning each façade. A square chhatri on top of each façade looks quite impressive.

An additional floor in the single-storeyed Assembly Hall looks like a hanging balcony. The serpentine brackets originating from the base of its columns help to support the flat ceiling. The wagon-vaulted ceiling crowns the smaller hall to the south. This graceful hall is unique because of the corridor on three of its sides and beautifully carved perforated screens inside it. There is a series of living rooms on its southern side. The western hall has a flat ceiling and elaborate carvings. The room on the southwestern corner of the court has a pyramidal ceiling while that on the northwestern corner has a vaulted lotus ceiling. The rooms on the eastern side have beautiful stuccowork and arabesque designs.