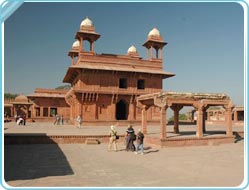 Diwan-i-Khas or Hall of Private Audience was used by the emperor for the reception of important guests such as kings, ambassadors and nobles in private and to deal with important affairs of the state. Constructed in 1635, it had two halls and the interior hall was known as Tambi khana. Diwan-i-Khas had a flat wooden flat ceiling covered with gold and silver leaves in relief to imitate the rays of the sun. Open on three sides, one can enter it through five arched openings supported on double columns. Unlike other architectural example of Shah Jehan's time, it had no chhatris over the parapet. The Persian inscription inside the interior hall inlaid in black stone and dated 1636-37 compares the room to the highest heaven and the emperor to the sun. The chambers were profusely decorated with highly refined inlay work in floral patterns on the borders of the dados and exquisite carvings in the middle in relief. The work was done judiciously on the places selected carefully to present the work in the best possible manner.