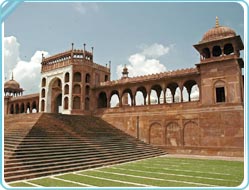 The Moti Masjid or the Pearl Mosque, built between 1648-54, stands on the ground that slopes from east to west to the north of Diwan-I-Am complex. It is known so because of its pearly white marble interiors. The exteriors of the mosque seem to be made of brick. The monumental mosque was built at that time at an exponential cost of three lakh of rupees and had a marble-paved court. The marble tank situated centrally in the court and the sundial made up of an octagonal marble pillar in one of its corners are quite impressive. There are arcaded cloisters surrounding the courtyard on the northern, eastern and the southern sides with twelve sided pillars and cusped arches while the prayer chamber is on its western side.

The main entrance to the mosque is on the eastern side and thus, it is much larger and more beautiful than the subsidiary gates on the southern and the northern sides that had arches and three square chhatris crowning them. The main gateways are approachable by two staircases and had a red sandstone exterior and a marble interior. The prayer chamber has an arcade of seven arches. Out of its twenty-one bays, only three have vaulted soffits. Its western wall has beautifully carved and inlaid mihrab and six niches corresponding to the arches of the façade. Unlike the usual three steps, there are four steps to the pulpit. There are prayer chambers for women on either side of the main prayer chamber that had a marble latticework screen separating them from the main hall. This chamber has three bulbous domes crowning it. There are seven beautiful square chhatris above the parapet and an octagonal tower with a marble cupola on top at each corner.