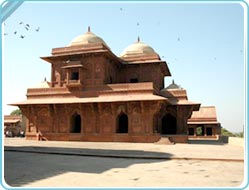 According to popular beliefs the most probable occupants of this palace were Akbar's two senior queens, Ruqayya Begum and Salima Sultan Begum. Birbal's house stands near the northwest corner of Jodhbai's palace. It is one of the marvelous buildings of imperial Harem. It was built in 1571. It consists of fours-quare rooms, each measuring 16'-10" (5.13m) square side, all interconnected through open doorways and two oblong entrance porches on Northwest and Southeast corners. While all the four rooms, have flat ceilings, porches have triangular chhappar ceiling with pyramidal roof. The interior of the building is divided into three days by richly carved pilasters. Shafts of these pilasters have been divided into three zones, which contain three different kind of decoration like single border designs, arabesque geometrical designs and stylized floral designs.

Capitals of these pilaster bears lotus petals and stalactite designs. The first floor has beautiful Jharokhas overlooking the court below and a simple chajja. Each dome of the upper rooms rests on an octagonal drum, which is also carved with a raised trefoil pattern. The domes are crowned by an inverted lotus and kalash finials and also bear traces of tile work. Though the entire construction is composed of lintels and beams, but beautifully carved brackets have been used to span the spaces between the pillars and ornamental arches. These brackets are carved on both faces with lotus and arabesque designs. Spandrels of the arches also bear arabesque and floral design.