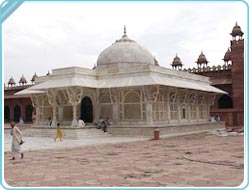 An extension of Northern suite of Jodh Bai's Palace, Hawa Mahal is composed of beautiful jalied screens. Therefore, it is named as Hawa Mahal or Palace of Breeze. This kind of arrangement of screens keeps the interior cool and at the same time ensured purdah for ladies. This architectural feature is very common in these areas, which suffers extremely hot summers. This small but elegant building is double storeyed and entirely made up of red sand stone. The ground floor is composed of square columns in double rows and is open. The upper storey is covered with beautiful stone screens. Stairways have been provided on Eastern and Western side of Northern suite to approach this upper storey. The stone screens are 63.5 mm thick; the largest are 2.28m high and 1.74m broad.

Viaduct or Passage
The purpose of Viaduct passage was to allow the ladies of the imperial Harem to go on outings in purdah. This has been provided from west of the Hawa Mahal to the plain below. It was originally closed with beautiful stone screens and extended upto Hathi pol and sangin Burj, but now only a part of it is survived. The viaduct is 27' (8.23m) high having arches of 11' (3.33m) in thickness, at regular intervals. These arches are surmounted by beautiful kiosk, having usual dome and octagonal drum on square base. The drum contains beautiful carved Tulips. The viaduct is made up of rubble and plastered above. There are evidences of a similar viaduct connecting Harem to Khwabgah of the Emperor but it has now been destroyed. Some traces of these splendid screens; with beautiful tracery work has been survived.