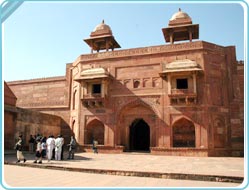 Jodha Bai's palace is the largest and most important part of Imperial Harem, having all facilities, provisions and safeguards. The name Jodha Bai palace is a misnomer in itself. It is most widely accepted that the building was for Raniwas or Zenani-Dyodhi. The palace building consists of a rectangular block measuring 231'8"x215' in dimension, with a single magnificent gateway on eastern side, which was protected by guard rooms, having triangular ceiling and other apartments. Several Hindu motifs have been used in the building, which confirms that occupant of the building was a Hindu lady.