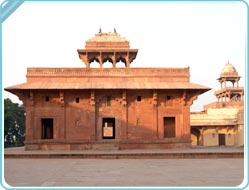 Mariyam's House is architecturally small and simple building but profusely painted in the interior and the exterior, in pleasing colour combination with gold. Now this building is popularly known as Maryam's House as it was abode of Akbar's Mother Hamida Banu Begum, who was entitled Maryam Makani (Equal in rank to Mary). This North oriented building, stands over a rectangular plinth, which is 18.23m north to South by 14.75m East to West in dimension and reached by steps centrally placed on Each side. It is composed of four rooms, one in the centre and other three at the back facing south.

Rama and Hanuman, most popular Hindu deities are carved in relief of the brackets, on the northern façade of the building, which shows Akbar's liberal attitude towards the art without any discrimination. The interior has beautiful paintings depicting elephant fights, hunting, battle scene and tournaments. Pilaster of Northwest corner contains scenes depicting nature. In addition to the murals, the palace also has series of carved designs like row of elephants, hamsa (swan), and kirti mukhas on the brackets and chhajja bears.