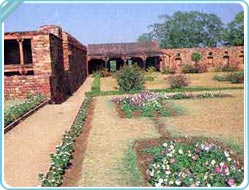 Situated near Mariyam's House, Zenana garden was meant to be used by royal ladies and ensure complete privacy for them. Thus, plastered rubble walls enclosed it with a dooway and a guardhouse in the northwestern side of the paved court flanking the front side of the building. However, these walls have been demolished now. Typical of Mughal gardens, it was reared in a charbagh pattern, divided into four quarters by shallow water channels intersecting at right angle. There was a fishpond in the center of the garden. Niches were made in the northern wall for the lamps that illuminated it in night on festive and ceremonial occasions. There is a carved sloping stone slab on the southern side with fish scale to allow the smooth flow of water in the tank.