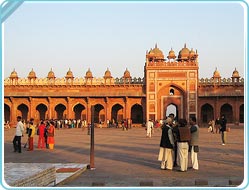 Badshahi Darwaza or the Royal Door was reserved for emperor to join the congregational prayer. It was situated on the eastern side of the mosque facing Agra and was the main entrance to the mosque. Projecting out in the form of a half hexagonal porch, it has two kiosks and merlons at the top. The gateway is adorned with bands of buff sandstone carved in geometrical designs. It has two arches one on top of the other.

The cusped small entrance arch inside is ornamented with lotus bud and leads to a hexagonal vestibule. The roof of this vestibule is in the shape of a segmented-shaped dome crowned by a flat roof. Its upper storey houses a gallery and it has arched recesses on either side and cusped arches on its top.