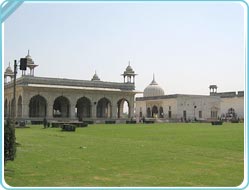 Rang Mahal or the Pleasure Palace is situated to the west of Jami Masjid. One of the oldest buildings of Fatehpur Sikri, it showcases several decorative motifs that were used here for the first time. It is in ruinous condition now. It is said that Akbar built it for his wife on advice of Sheikh Salim and that prince Salim was born here. The surviving portions of the palace have two courtyards in the southeast corner of the building with the pair of tall twelve-sided columns that have extraordinary double capitals and a deeply coffered roof. The beautiful brackets of these columns are shaped like heads of horses.

It is said that originally it had five inner courts, one in the centre having one court on each side. The red sandstone palace had main entrance to its north. The eastern courtyard has three openings or tibara dalan. The inner closed room in here has survived. It also has a double storyed façade overlooking the court below. The building has a double storeyed living room, which lacks any superstructure or dome. Its beauty lies in the series of brackets used here. Despite its pitiful condition, this building is believed to be the best example of residential architecture in India.