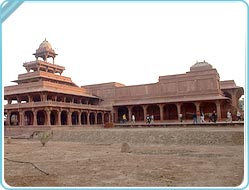 Abdar Khana is situated to the north of Anup Talao. Though people believe that it was once used as the girls' hostel, historians put its use as a water storage house. They state that in the time of purdah system, where women could not show their face to any stranger, there is no logic behind housing them in a building in the main palace complex where men were received because it would have invaded their privacy. It is said that it was built to store drinking water for Akbar. Akbar drank only water of River Ganges and thus it was kept preserved for him in the sealed jars that were cooled using some reagents. The walls of this double storeyed building are composed of a series of piers and have deep shelves with arched screens to store water jars and tropical fruits for the king such as melons, mangoes and grapes.