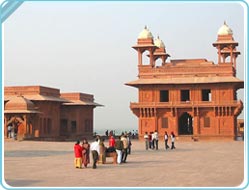 A small but elegant kiosk rising from a small extension of the platform of Ankh Michauli, the treasury, it is known as Astrologer's seat because it is believed that it used to be the seat of an Indian yogi, whom Akbar often consulted in his political matters. However, these legends seem to be mere rumors. The presence of this kiosk near the treasury suggests that it could have been the place where the emperor could sit occasionally to see the distribution of copper, silver and gold coins to the deserving people and his subordinate officers. This kiosk is 3 sq m in area and supported on four pillars. These pillars have octagonal tops and square base adorned with semi circular patterns.

The leaf designs grace the roof. The dome is square with interlocking tulip pattern and crowned by an inverted lotus. A usual stone eave and torana-shaped brackets surround the kiosk. These brackets are known as torana-shaped brackets because they were originally used to adorn doorways of Hindu temples known as toranas. These brackets were composed of two separate pieces of red sand stone that were later joined to give the complete structure. All these brackets are divide into eleven bands having beautiful carvings, especially the mouth of a pompous monster.