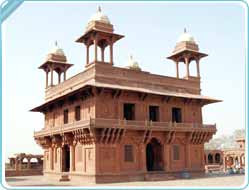 Diwan-i-khas or Hall of Private Audience is situated in the northeast corner of the royal complex with a huge and richly carved pillar in the center. The central platform attached to the pillar was the seat of the emperor while the diagonal galleries are believed to be the seat of ministers and nobles that were entertained here. However, since the galleries were too narrow to accommodate all ministers of the court at once, some people think that this building was actually the storehouse for the gems and jewels of the royalty and emperor used to come here only to inspect his jewels. According to Abul Fazl, Akbar had three treasuries that were close to each other and one of them was used to store gems and jewels only.

Since, this building is also close to Ankh Michauli or the treasury for gold and silver, it is quite probable that this place is used as a treasury for jewels. This square red sand stone building has four double-storeyed façades. Though, there is no superstructure or dome here, the four beautiful kiosks at each corner of the building that are octagonal in shape and have a circular dome with an inverted lotus on the top, providing a superlative altitude to the building. The main hall has a most elegant capital composed by joining 36 brackets arising from the pillar in three tiers, in a circular shape. Though, the building lacks much ornamentation yet the pillar in the center is certainly one of the masterpieces of Mughal architecture.