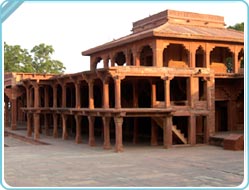 Khwabgah or the Dream Palace, as the name suggests, is the most beautiful building of the royal complex and was conceived for the emperor's personal use. It has a separate room for the emperor to hold secrete official meetings with his nobles, Kutub khana or a personal library with a number of books and official documents, a small bathroom and the bedroom of Akbar. The double-storeyed red sandstone building is one of the most well planned buildings of Fatehpur Sikri. Abul Fazl states that there were about 25000 manuscripts in Akbar's library. The room behind Kutub Khana used for secret meeting still has traces of some of the most beautiful paintings. This complex was also connected to the offices or the Daftar Khana of the royal complex.

The bedroom known as Khilwatkada-i-Khas was surrounded by a pillared verandah with a stone-tiled sloping roof. It was connected to the imperial harem and Panch Mahal via a covered passage. The ground floor chambers are simple but the emperor's personal chamber on the first floor is pompously oramented using carved flat panels, beautiful murals depicting geometrical and floral patterns and painted designs. The mural paintings on the wall depict scenes from Mughal court, which have faded with time. Persian inscriptions in different colors are also used often praising the palace and comparing it with paradise.