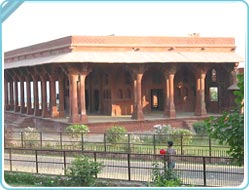 Samosa Mahal is so known because of its triangular shape that resembles the shape of an Indian snack known as 'samosa'. It is said to be the residence of one of the nobles of Akbar. No records are available about the real name or occupants of the building and its shape has been altered ever since its northern portion was demolished and an enclosure wall was raised in its place. It is single-storeyed and has main entrance to its west. The irregular courtyard is surrounded by verandahs on its three sides. It has five rooms with its roofs supported by pillars and brackets on the southern side.

The other two sides also have series rooms and an open courtyard. There are six rooms on the eastern side and four rooms on the northern side. The palace being a residential building also has hammams or baths and toilets with earthenware pipes. It has been designed beautifully, keeping in mind the needs and comforts of the occupants. A combination of red and gray sandstone has been used and ornamental arches and friezes have been used on all sides. One can still see the traces of the paintings in the interiors. Beautiful pillars and heavy brackets graced the verandahs.