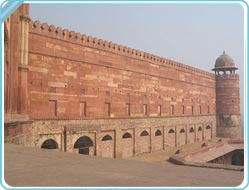 The town of Fatehpur Sikri stretches nearly 9.75 km from one end to other. The town has a 6 km long fortified wall. This stonewall is made up of rubble and encircles the city from north to southwest. The wall has a 2.5m wide path for passing soldiers. An artificial lake protected the western side of the city.

The city has eight gates as Delhi gate, Agra gate, Ajmeri gate, Gwalior gate, Lal Darwaja, Suraj gate Chandan gate and Terha gate. All these gateways are almost similar in plan and edged with semi circular iron grips on both sides. Agra gate is in the best condition among the gates. Agra gate is about 15.55m high and faced with red sand stone. In the center of the gateway is an imposing portico, which opens into an arched hall of 7.62m sq.