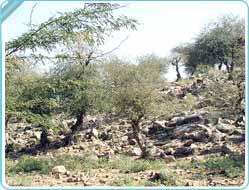 There are interesting legends attached to Govardhana Hill. It is said to be in shape of a peacock in the pose when he curves its neck and puts his head under its stomach. Radha Kunda and Syama Kunda are said to be its eyes, Dan Ghati to be its long neck, Mukharavinda to be its mouth and beak and Punchari to be its back and tail feathers. It is said that in Satya Yuga, the great sage known as Pulastya Muni approached Dronakala, the king of the mountains, and asked him for his son Govardhana. Dronakala was much in love with his son and gave him away only on the condition that if the sage kept Govardhan down, the mountain would remain at that place, hoping that in this way the sage would not be able to take Govardhan too far away from him.

Finally, while the sage was passing through Braja Mandala, he had to put Govardhana down to finish his toilette and thus, when he returned Govardhana could not be moved. The angry sage then cursed Govardhan that it would shrink by the size of mustard seed daily. It is said that Govardhana Hill was 115 km long, 72 km wide and 29 km high. Today, the hill is only 80 ft high. Yet another legend states that at the time when the army of Lord Rama was constructing the bridge to Lanka, Hanuman carried off Govardhana from the abode of Lord Shiva in Himalayas to help built the bridge. On the way, when he was passing through Braja Mandala, he was informed that no more stones were needed and thus, Hanuman left Govardhana there. Govardhana felt lost and desperate for he was away from both Lord Shiva and Lord Rama. Rama answered his prayers by promising to come to him in his next incarnation and thus, in Swapur Yuga, when he took birth as Sri Krishna, he held Govardhana up for seven days and nights to save the residents of Braja thus raising his worth infinitely.