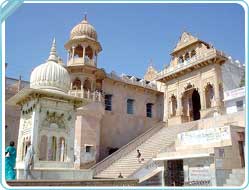 Vrindavana within the jurisdiction of district Mathura is intimately connected with Krishna just like all its surrounding regions. Devotees believe that Lord Krishna never leaves Vrindavana and engage in his pastimes for eternity. It is believed to be one of the transcendental abodes of the Lord as mentioned in 'Srimad Bhagavatam', the religious holy book of Hindus. Mathura and Vrindavan have as many as sixty billion sacred places! The presiding deity of the once forest of Vrindavan was Vrinda Devi, who was believed to be the expansion of Radharani, the beloved of Lord Krishna.

It is said that at the time of Krishna, Vrindavan was a forest and Tulsi plants grew here abundantly. Since the other name of Tulsi is Vrinda, it was known as Vrindavan or Forest of Tulsi. The forest was a large one and stretched from the present town of Vrindavan across to Nandagaon and Barsana on one side and Govardhana on the other side. It is said to be the twelfth forest and the favorite forest of Lord Krishna, which he often visited with cowherd boys to graze his cows. There was a Radha Kunda within the forest.

It was here that Krishna played the enchanting tunes with his flute every evening and would beckon 'gopis' or maids of Braj to play and dance 'raas'. There these beautiful village belles and Krishna would dance in the ecstasy of pure and spiritual love. Since, then 'Raas lila' has been re-enacted several times in Vrindavan. It is said that despite their numbers, all gopis got a chance to dance with their favorite Krishna and exchange intimate loving glances and embrace him. The site where the dance is believed to have been performed is semicircular in shape, is known as 'rasa mandala' and has a parameter of 16 km. It is situated on the banks of River Yamuna.