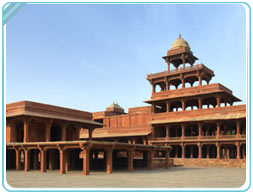 Fatehpur Sikri was planned as a great town by Akbar with great care and planning in the honor of Sheikh Salim Chisti but had to be abandoned only after fifteen years due to scarcity of water in the town. Sheikh Salim Chishti was a Sufi saint who blessed the Akbar with his first son and heir, who was named Salim after him and later came to be known as Jehangir. The town was otiginally named Sikri after the village, where it was founded but its twin city Fatehpur (Victory Town) was erected to celebrate Akbar's conquest of Gujarat in June 1573.

However, ruins of the temple dating back to 12th century suggest the reign of Rajputs in the area long before Mughals took over the area. The two mosques in the village of Sikri have inscriptions, which announce their conception in 1314 under Mohd. Khilji. There have been records that Babur renamed the village 'Sikri' as 'Shukri', meaning 'thanks to the god'. It was also the famous dwelling place and khanqah of Shiekh Salim Chishti, the famous Sufi saint whom Akbar revered for blessing him with child.